Note… there’s no need for us to re-summarize the entire history of the touchscreen.

If you want to read the fully immersive, and comprehensive history of the touchscreen…

However, we wanted to give you some basics on touchscreens and why they’re so amazing.

That little device that you hold in the palm of your hand, or on your lap in the form of a tablet, has it’s origins in thoughts and ideas first dreamed up in the 1940’s.

were all available and combined together in sufficient quantities in order for touchscreens to start showing up in exhibition halls and large offices.

Even then though, the technology was prohibitively expensive.

Here’s what’s behind your touchscreen today: 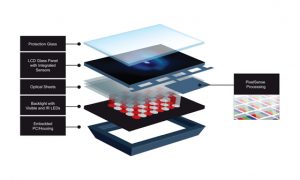 CRT (while not in use on devices in the same way today) stands for “Cathode Ray Tube.” CRT is the technology used in traditional computer monitors and televisions. The image on a CRT display is created by firing electrons from the back of the tube to phosphors located towards the front of the display.

Even just a short history of demonstration videos of the technology shows just how far we’ve come in a relatively short amount of time.

1989: An early Demonstration of Manipulation of “Virtual Space” with Gestures

2001: The Portfolio Wall
While this wasn’t a touchscreen, it showed the ideas behind sharing technology on a large screen across a network in real-time or near real-time.

2006: TED Talk
The most fascinating thing about this video is to listen to the audience’s responses.
Just 13 years later, we’ve already taken for granted how totally revolutionary touchscreen technology is.

Today, we salute you, the MIGHTY Touchscreen!  Over 70 years from dreamed up concept to today, and still advancing forward!

Again, if you’d like to read the full history as well as where we’re going with touchscreens, there’s a great write-up on ARSTechnica.